Tesla’s latest electric car, the Model Y, is very different from the Model 3. While we waited for our full test drive, we had the opportunity to come aboard to explain how it cultivates its differences. 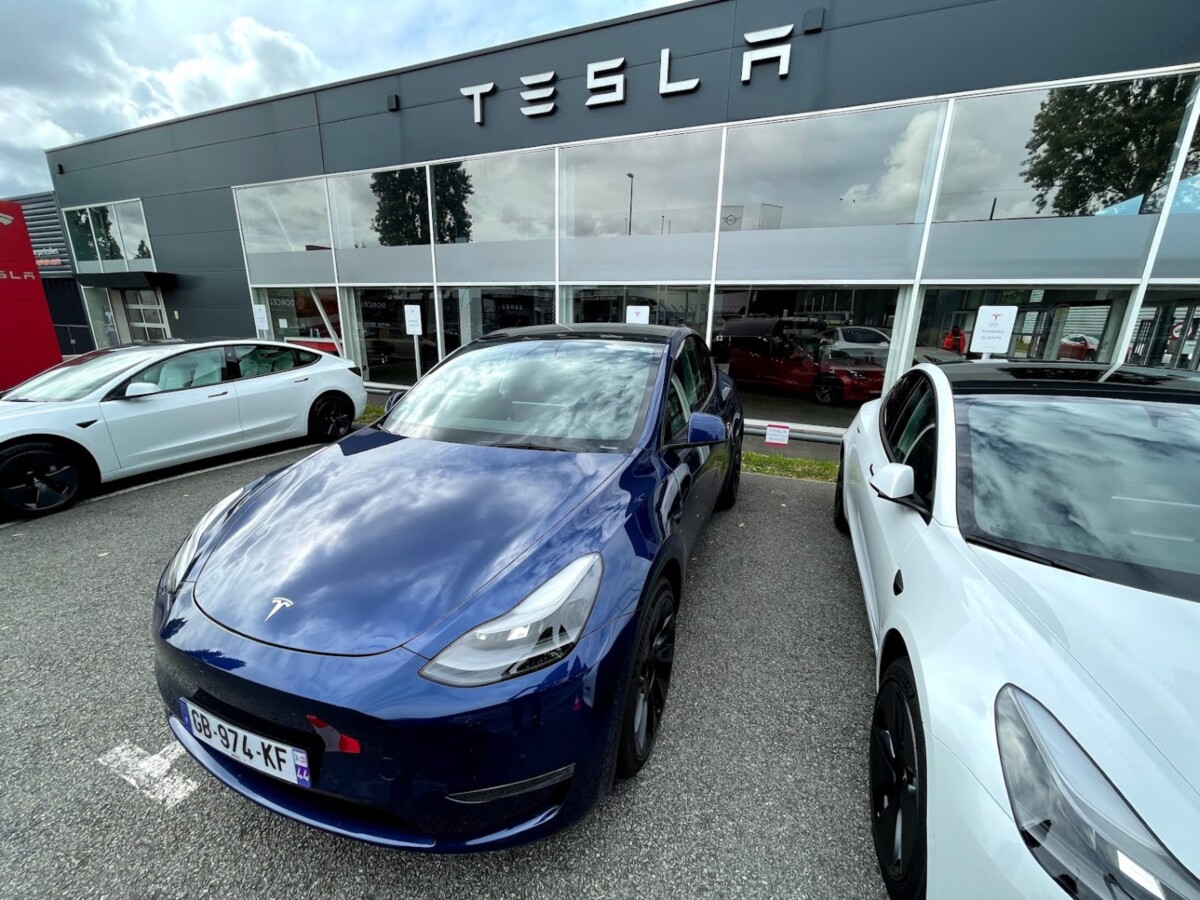 The Model Y near a Model 3 in front of the Tesla store in Nantes. With an ultra-wide-angle camera, the two cars look very similar.

While waiting for our test, we took a closer look at the Model Y which has been available in dealerships for a few weeks in France.

They look alike, but they are very different

Since the fronts of the two models are very similar, we tend to describe the Tesla Model Y as a “taller” Model 3. After having been able to compare the two cars side by side, and while waiting for our test and our video comparison, we were able to notice real differences. The two cars fall into two distinct categories, and this separation is not anecdotal.

The Model Y is indeed based on the Model 3, it even shares 75% of its parts, according to Tesla. To the untrained eye, they can be difficult to distinguish. Both have the single screen that consolidates access to almost all of the car’s functions into a single 15-inch touchscreen. We also found the interface smoother on the Model Y. However, it is the same interface on a similar screen. Maybe Tesla is using a newer chip. 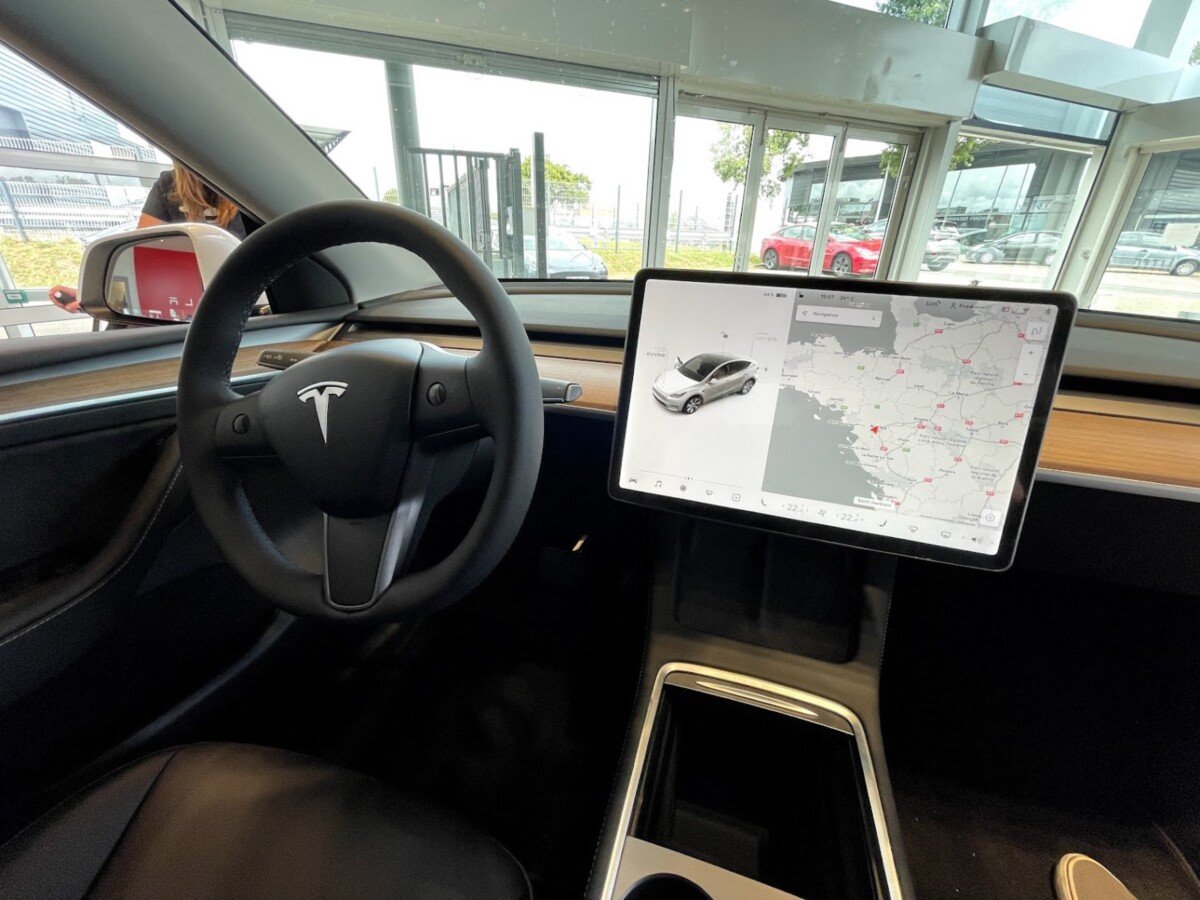 The dashboard is the same on both models

You have to get into the car and settle in to realize that this resemblance is misleading. Indeed, the posture is very different in the Model 3. On the Model Y, the steering wheel is quite close to the bust, while the back is positioned perpendicular to the ground, with thighs resting comfortably on the seat. We end up with a more upright position, we dominate the road much more. 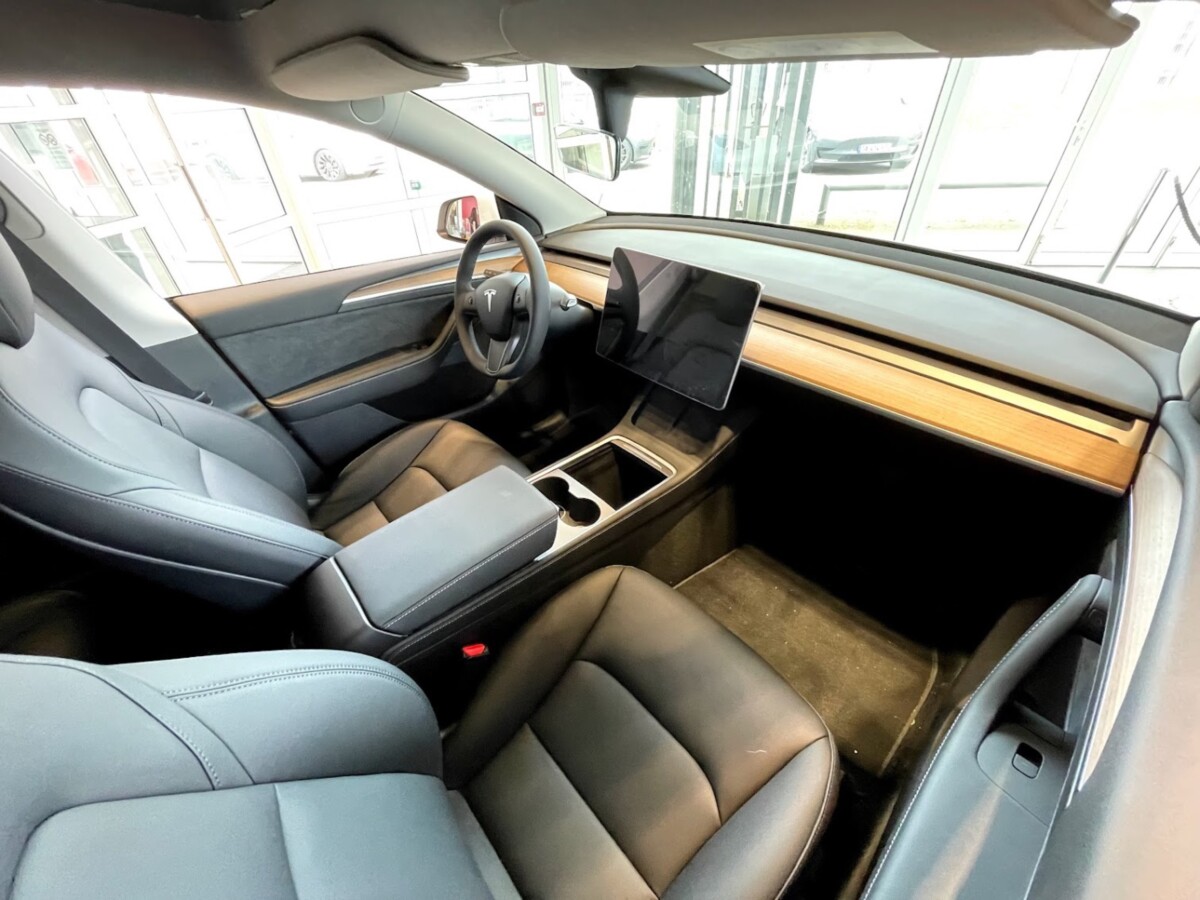 The black finish with the wood on the front is the base option at Tesla. Note that the central column leaves room for a lot of storage, as well as two locations for wireless charging

This is explained by the 18 centimeters in height that separate the two models. The ground clearance is higher than that of the sedan, 16.7 centimeters, against 14 cm for the Model 3. On the one hand, the Tesla Model 3 is a sedan with a very low position and the legs slightly bent. On the other hand, the Model Y is an SUV, you can clearly see it once inside. 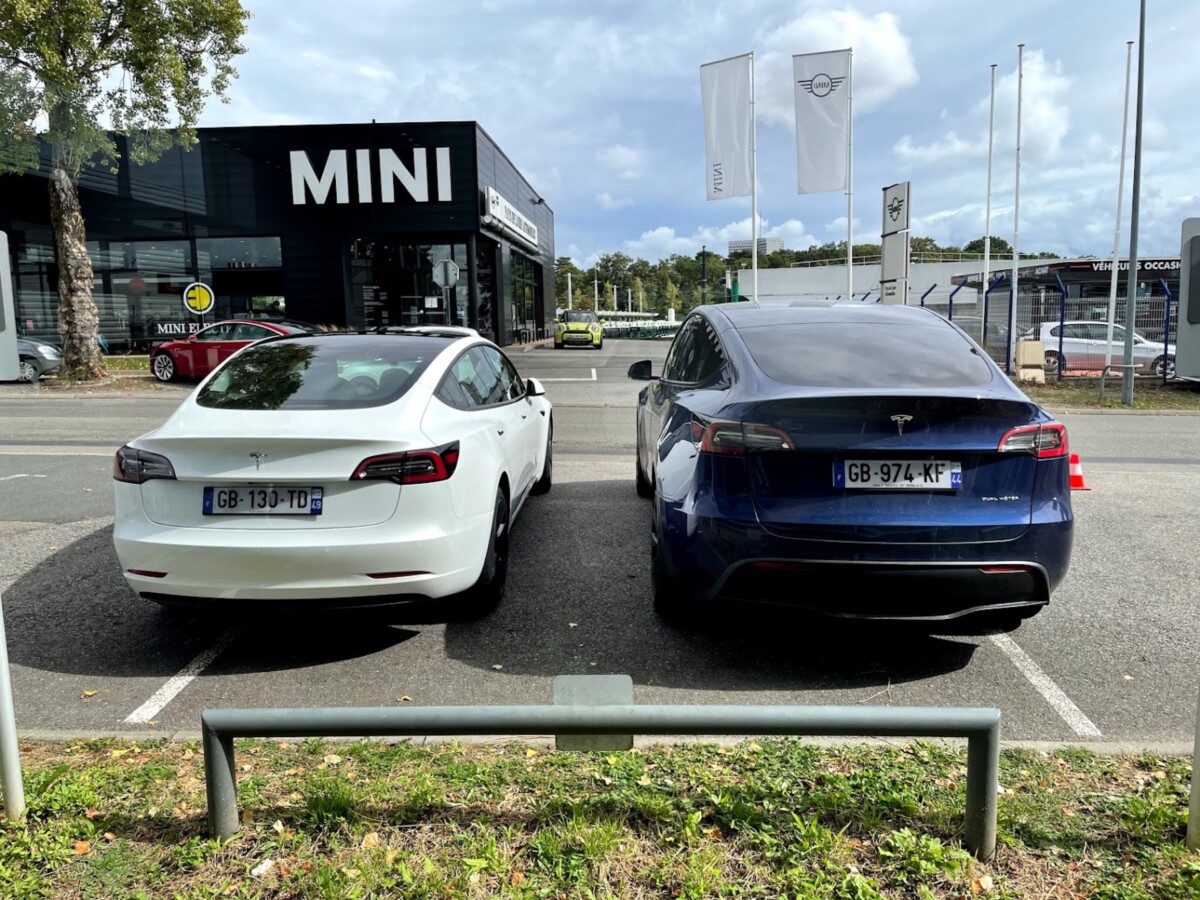 We can see the difference in size between the two models. You don’t even have to tell you if Model Y is on the left or right in the photo

During our test, we will have the opportunity to explain it, but if the Tesla Model Y is presented as the most efficient electric SUV on the market, it remains less efficient than a Model 3 because of its aerodynamic efficiency. Not to mention the impact of weight, the two cars do not play in the same category. 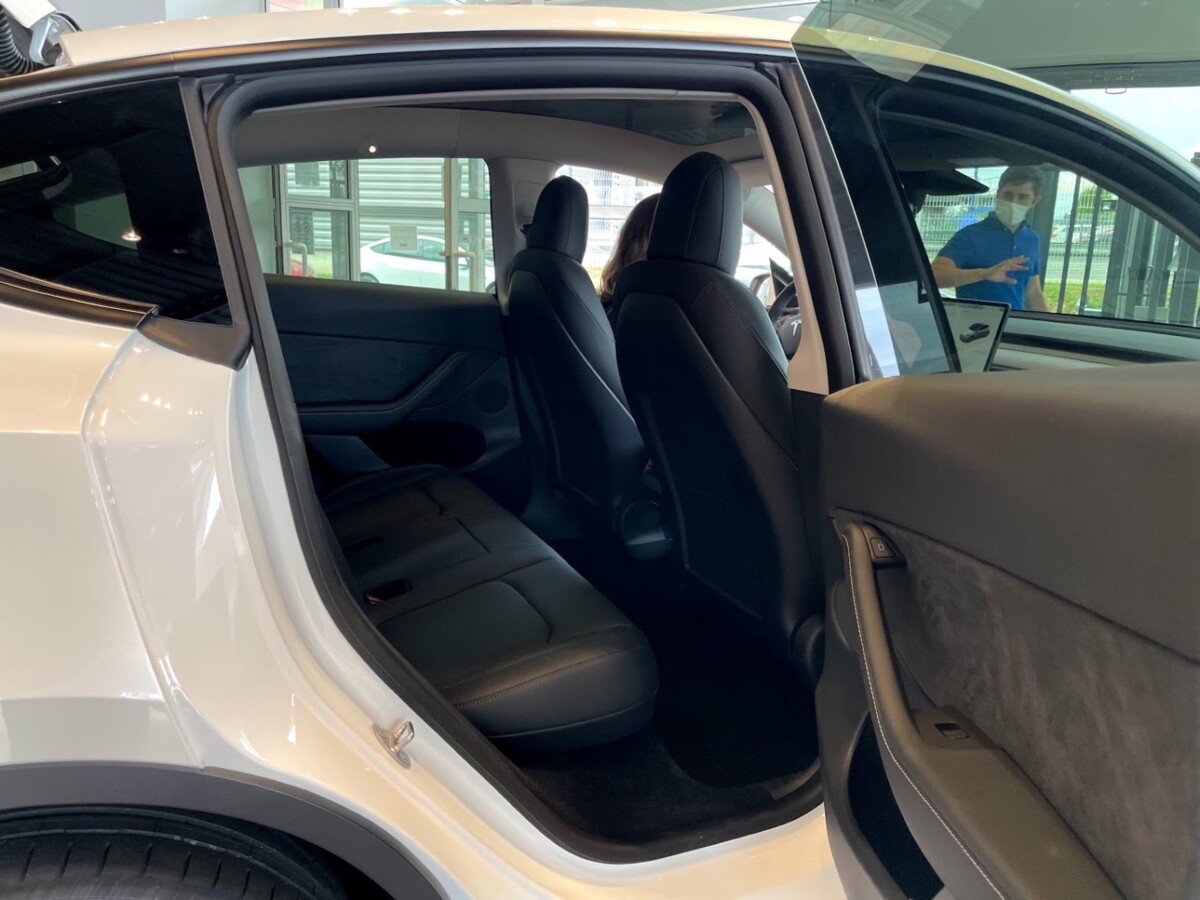 Much more room in the back

The big differences in dimensions between the two models are also visible at the rear. First, third place in the back seems much more usable than it is on the Model 3, knowing that the floor is perfectly flat. There is 7.1 centimeters more width on the Model Y. We therefore have more room in width, in height … but also for the legs with more clearance. 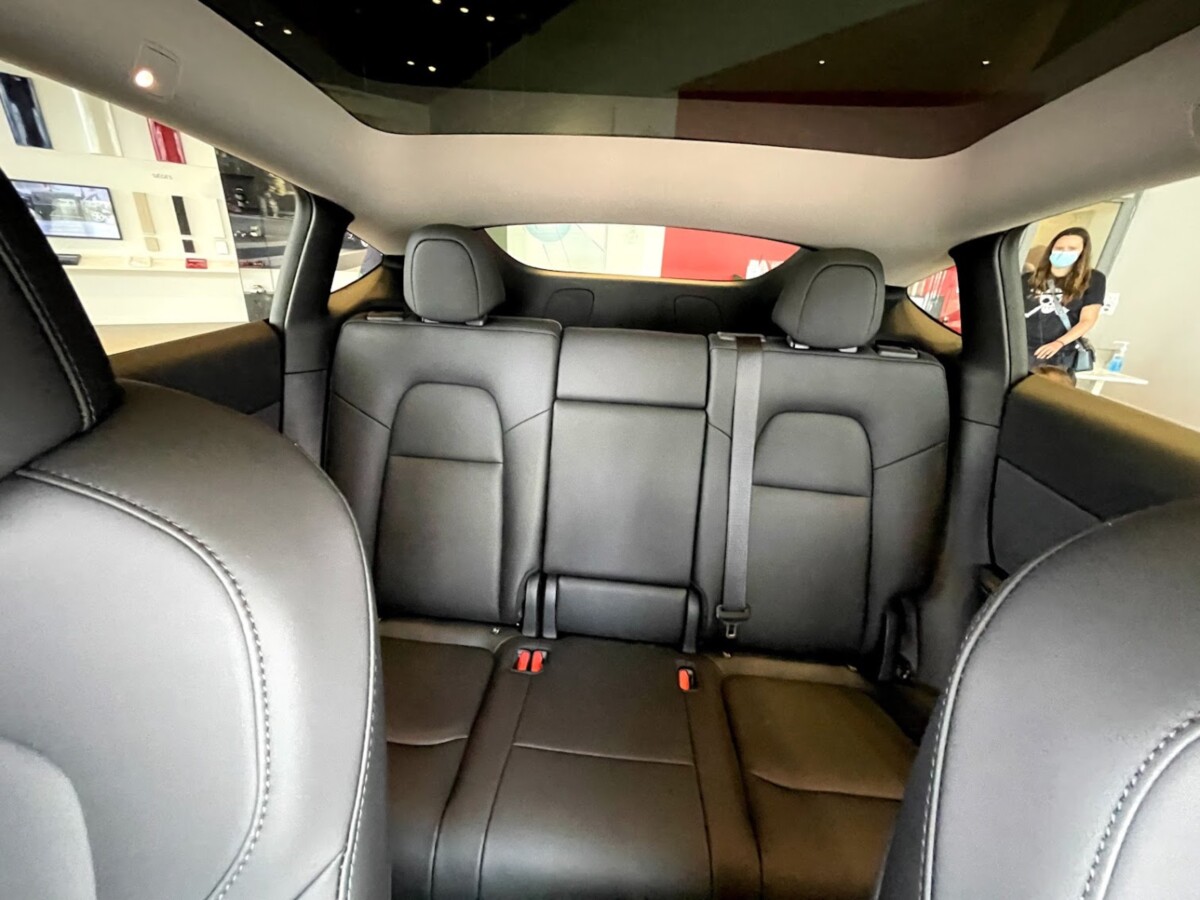 Seats in the back

In addition, the absence of a bar at the panoramic roof makes the interior of the vehicle clearer, it gives the impression of being in a larger space and it offers better headroom. We also noticed that the seatbacks recline backwards, while the headrests are all adjustable and the center backrest folds down to form an armrest / cup holder.

A huge volume of chests

The big difference, especially if you have a family, comes from the safes. The rear trunk is huge and offers a volume of 854 liters. That’s 100 liters more than the very large Peugeot 5008. And again, 117 liters are added at the front, under the hood. If you lower the rear seats, there are even buttons in the trunk to do it (in three parts to choose from), the freed space reaches 2,041 liters.

Again, being that this is a car I have had, the Peugeot 5008 offers 1,940 liters. On the other hand, there is no luggage cover, which is a security problem in my opinion. On the Model 3, the lack of a tailgate makes it possible to completely hide what is in the trunk. 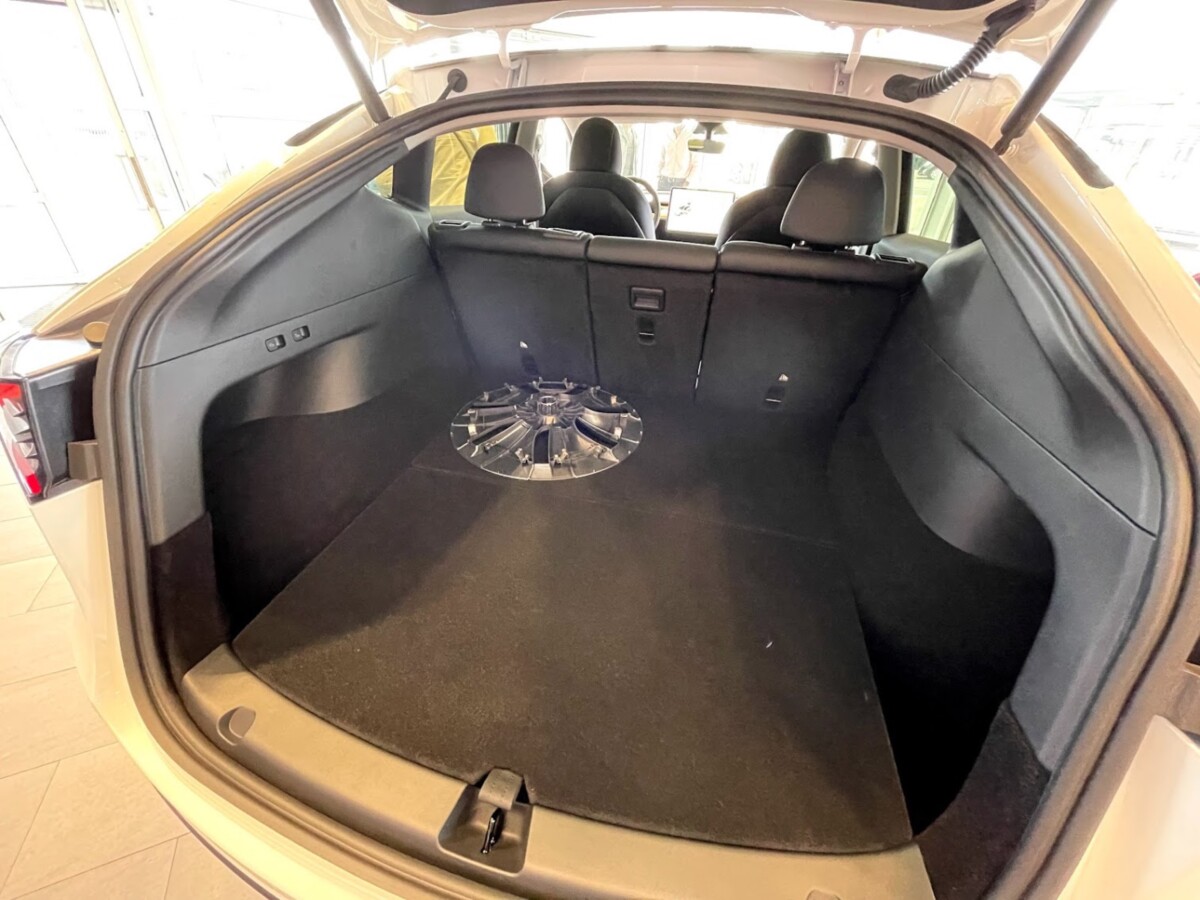 The presence of a tailgate with 854 liters of volume makes it one of the cars with the largest storage volume available. The length of the trunk is a little over 2 meters. You will also notice the possibility of tilting the central rear seat to have a ski pass. 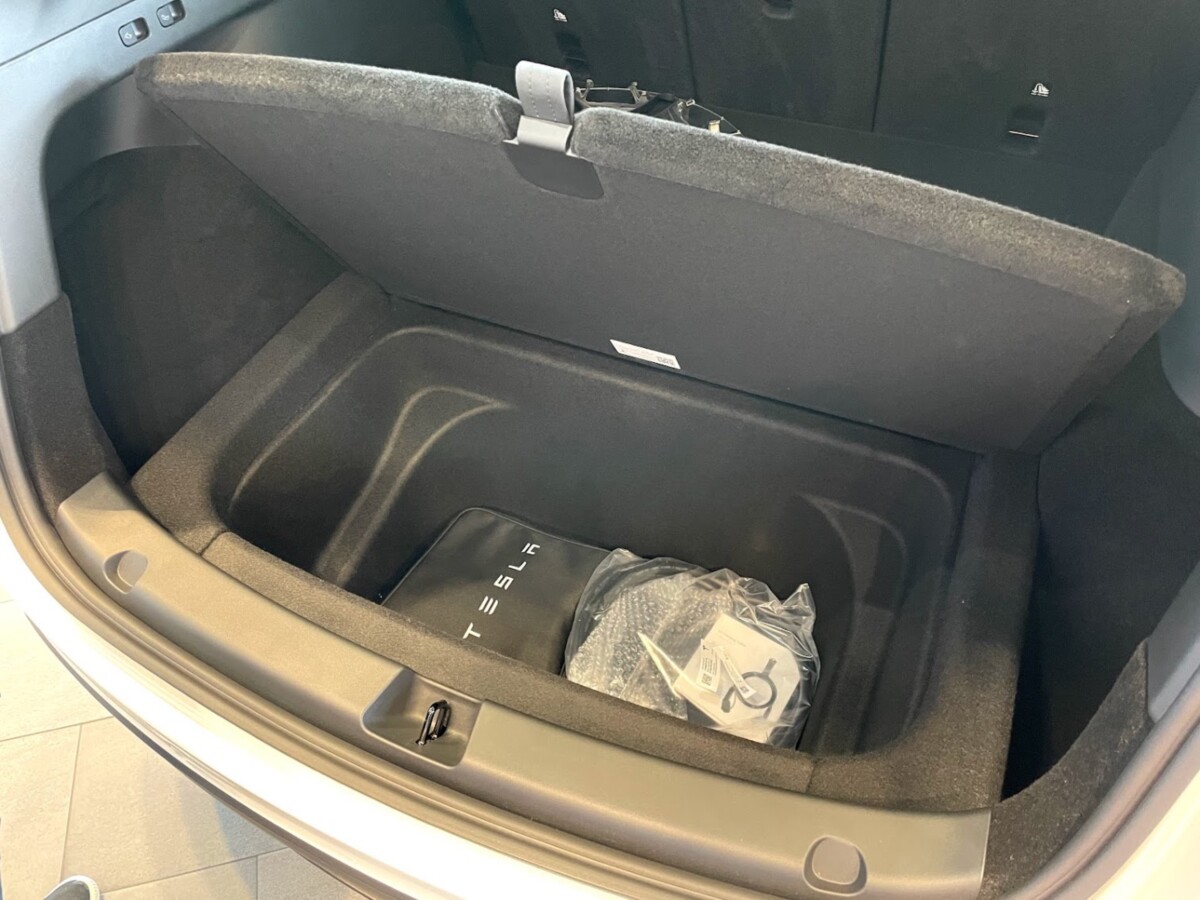 You also have two storage spaces under the floor to store cables … and a suitcase. The depth of the first storage is 36 centimeters 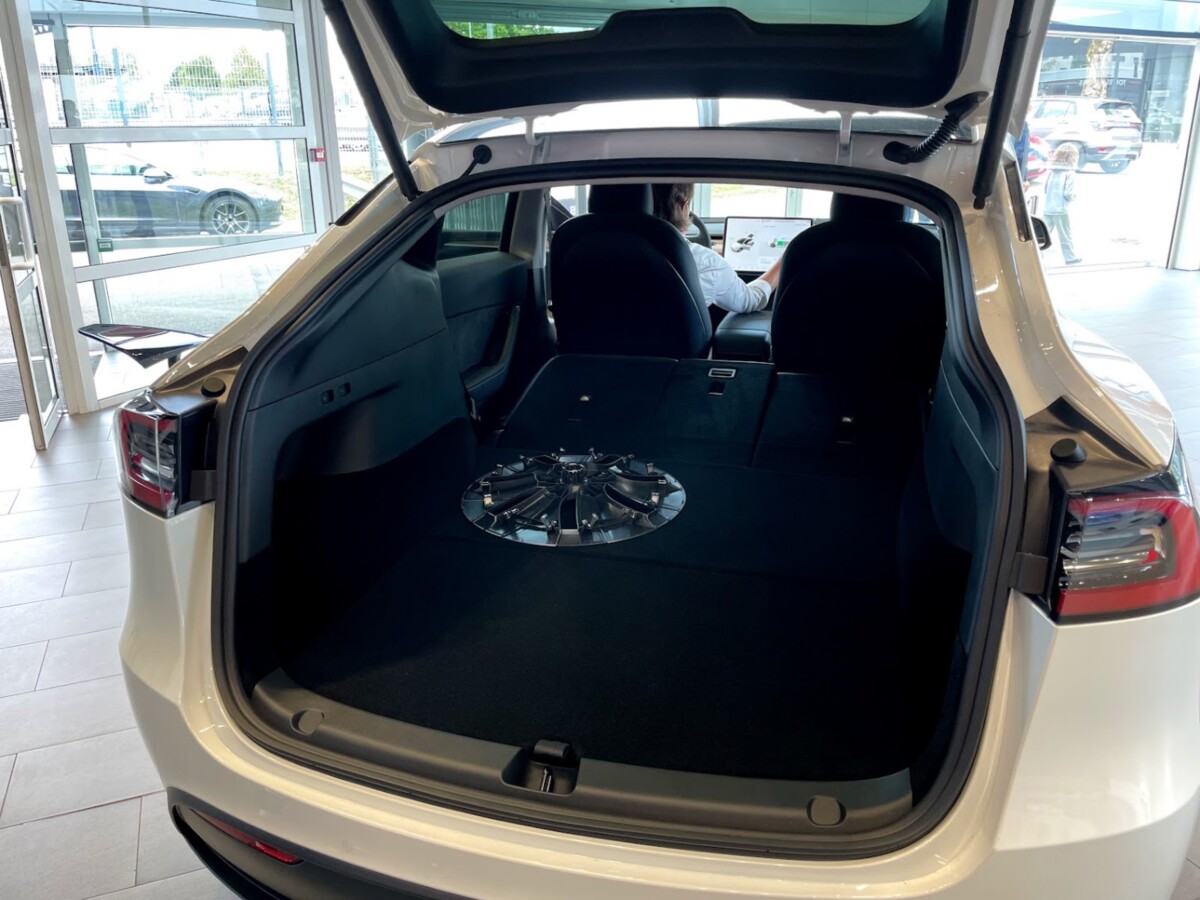 2,041 liters by lowering the seats

The front trunk is twice as deep as that of the Model 3. This results in the presence of an emergency lever, mandatory in the United States in the event that one is locked in it. As a reminder, this trunk can be opened exclusively from the touch screen or on your smartphone: it’s very practical, you can lock it with a PIN code, you can place a folded stroller … or simply put the shopping bags in it. . 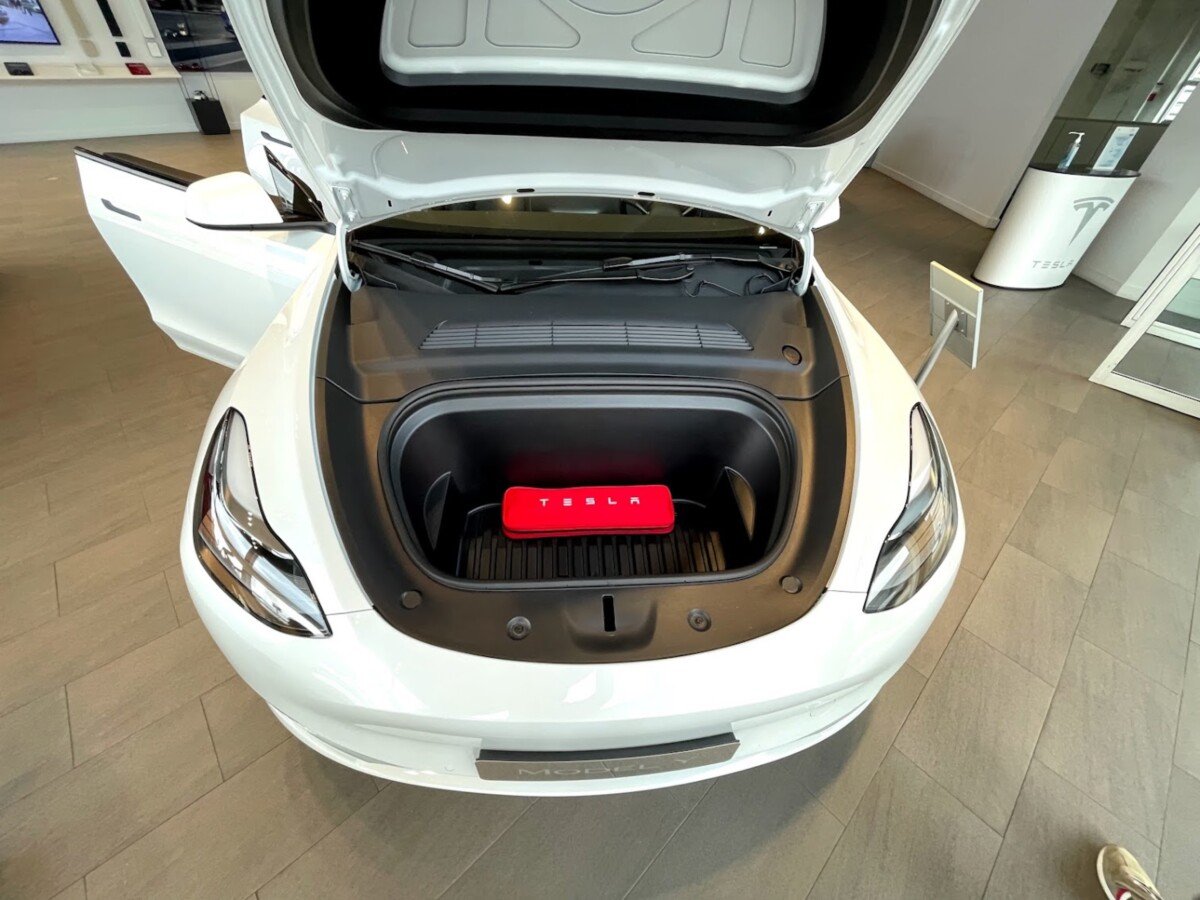 The front trunk is 117 liters, you can fit a large cabin suitcase (and even more things) 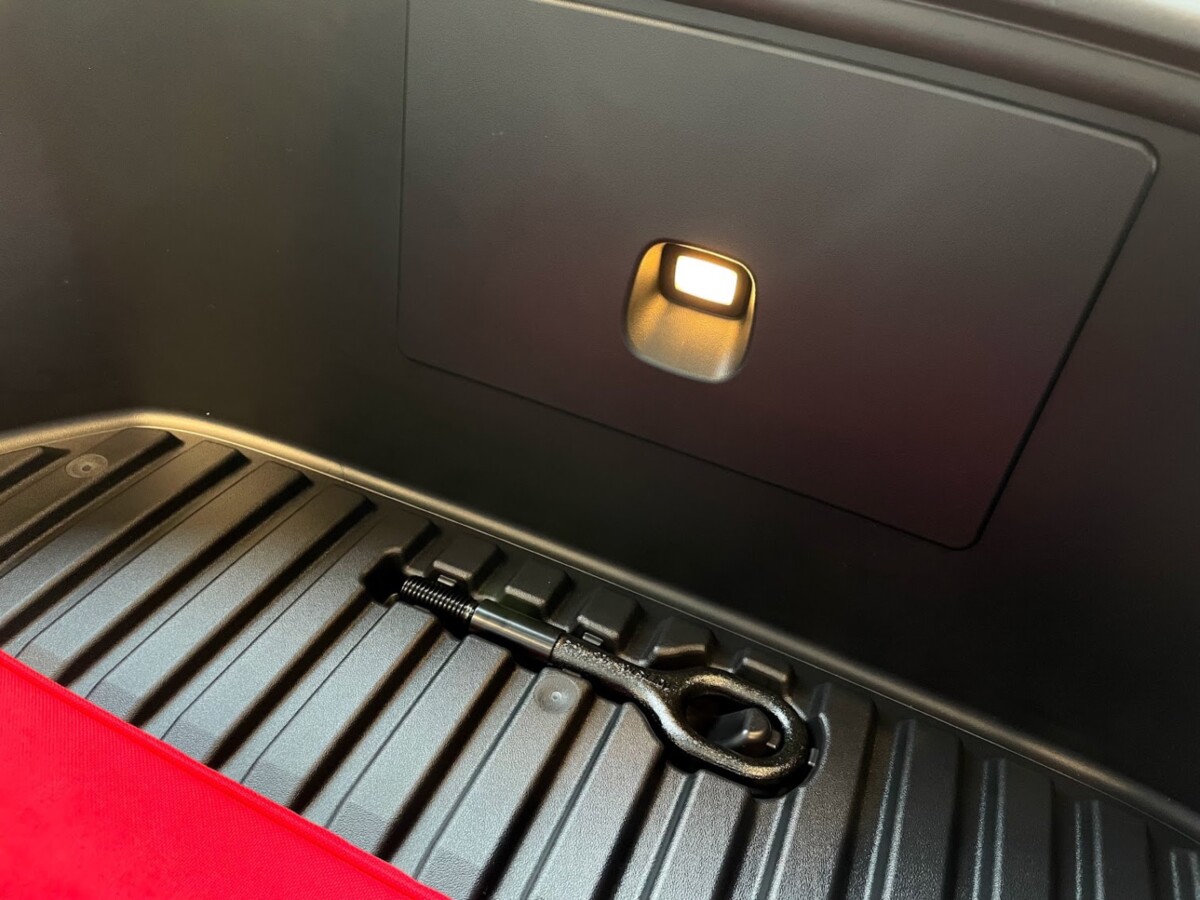 The lever is located at the LED

We’ve kept countless details for you which you’ll find out in our full essay which will be out by October. We will travel the roads with it and compare it with a Model 3 to help you in your buying decision.

At the end of 2020, Tesla presented many novelties concerning its best-seller, the Model 3. In addition to some very slight aesthetic changes, it is especially in terms of technology and price that the electric sedan is evolving.
Read more